Choice, and What Visual Novels Have to Say About the Soul

Nature as opposed to Nurture is one of a myriad of fundamental questions that I and I assume many others have heard debated as a matter of preventing crime, and the culpability therein. Was Hitler born the man who would destroy Europe and kill millions, or did something happen to turn the boy bearing the name Adolf Hitler into the man we read about in the history books? My favorite poem that demonstrates this (while also not taking a stance) is Hitler's First Photograph by the polish poet Wislawa Szymborska.

Most accept a sort of compromise between the two, some combination of nature and nurture, the neural pathways meeting the touch of a loving mother makes a man who he is. I think perhaps less discussed, though not less though of I hope, is the consideration of what a choice is with regards to this discussion. Are we so in our own heads that our natural predispositions and whatever our parents, teachers, and friends taught us and did to us growing up, simply guide us along like puppets on a string? I don't think so at least. There is in psychology, in both present and past practice (I mention this continuity because both have particular issues that I won't get into), of a conscious and subconscious level of thought. I won't bore you with the details of that, as I'm sure you're familiar with it, but these to my mind effect the way we choose thing very differently. For my purposes imagine the subconscious is what our experiences say we are disposed to do, and the conscious acts on the subconscious concretely. We know what we want (nature/passions, etc.), we know what we think is good, and thus weigh these things perhaps unwittingly to decide what we will do. Thus, our nature and our nurture create a sort of gradient of choices that we are more or less likely the make but still able to while remaining our own person.

To move on from this theoretical base, I want to jump right into the actual subject of this article, Japanese Visual Novels. What is a visual novel, at its core? It's a storytelling format that relies heavily on text paired with rudimentary visuals, oft compared with a PowerPoint presentation, and often paired with a background soundtrack. But I think that the element of choice is also crucial to the core of Visual Novels as a medium, though its feasible for something to technically be a VN while being linear. Even relatively linear Visual Novel series When They Cry (のなく頃に) still has the idea of multiple endings derived from the choice mechanic baked into its meta, though it presents these endings in a controlled order.

I know most reading by this point have the idea, but I will go into a bit more detail in order to draw emphasis to some things. Firstly, in these novels, the choices are only made at select intervals, only when the software on which the novel is written allows you to make a choice for the perspective character. This is in contrast to a video game where every moment the player is making choices for the character, save exceptions like cutscenes or cinematics, even basic things like whether to move right left or straight. Secondly these choices effect on a very fundamental level what type of story you are reading. Usually in such novels, each ending is a contained story, though often the endings put together also form a coherent whole, such as with When They Cry or Muv Luv.

But what does this tell us about how the authors of such novels view the characters, and by extension, people generally? If these endings are radically different, with the crux of the change usually being the girl the main character falls in love with, does this then mean that the person the main character is at each end is actually a different character at his core? This could be plausible within a certain framing of the player, by their choices, essentially choosing which MC's story they'll watch by selecting the MC that would make the choices they select according to their nature. In a way the choice of going with girl A or girl B on a date in really the player saying "I would like to see the story of a protagonist that would choose girl A/B according to their nature or nurture that is unknown to me."

One Visual Novel that is not quite as ambiguous to allow such a line of thinking is age's Muv Luv Trilogy and in particular the third novel Muv Luv: Alternative. (From here on I'll be discussing major plot points and spoilers). As in this third novel, the nature of the Takeru's "looping" back in time is revealed to have been happening the whole time, at least since the second novel Muv Luv Unlimited due to Sumika Kagami's unique connection with a piece of alien technology. However, the important thing is that the Takeru Shirogane that the player sees through becomes a sort of "composite" of all the possible Takeru Shiroganes that occurred in the previous "routes" that can be reached by the player in the second novel, gaining all the memories of the times he fell in love with girls other than Sumika Kagami. And... not much is different about him. In fact, this slowly happens to every character with no dramatic changes, aside from having latent knowledge of things they shouldn't. And Sumika Kagami herself is essentially the case study in this "what is a person" question. When Sumika Kagami's brain is digitized and she becomes the 00 Unit, a silicon-based lifeform capable of being recognized as intelligent life by the BETA, she undergoes a crisis of identity about whether she is really a human being. This is in addition to her knowledge of Takeru's multi-timeline travel situation, which gives her an additional case of imposter syndrome with regards to her role as Sumika Kagami, and in particular the Sumika Kagami that Takeru Shirogane is in love with. As seen in the attached image, its clear Sumika has taken up the position that those in the other loops are other Sumikas, and thus the Sumika that Takeru is in love with is not her. Takeru doesn't accept this and insists that he is in love with her, who is truly Sumika even if she has different experiences than the one he met in the world of the first novel. He maintains this position even after Sumika projects the shame of her time being experimented on into his head. After this, Sumika, while still being hesitant about applying it to herself (using the term "for now let me be your Sumika") still emphasizes the continuity of character in Takeru, even across the worlds where he fails to find her or falls in love with another. 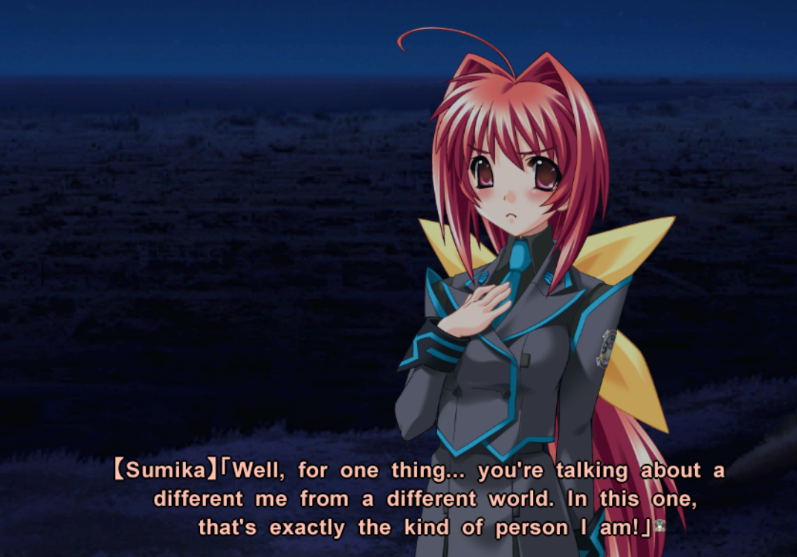 This, in essence, is what is meant by one's core personhood, that is the absolute parts of a person that do not change, or at least hardly change and only with help from outside (ie. God), despite the slight variation in outside actions. This is why, for example, the soul cannot repent after death. To change the core, you need help from the outside, you need communion with God and with your fellow man. This is impossible in the unnatural state of separation of soul and body after death, and the only time this goes away is immediately before you stand to judgement. This is why it is sometimes said that the torture of hell (speaking of the temporary hell before the eschaton) to a large degree is a torture of solitude and being absolutely alone with your passions indefinitely. This is also how God saves great sinners, however, through effecting this change, and for being able to detect the true core of a person, their soul (though I have avoided this term thus far) being separate from though not totally unrelated to their visible actions. 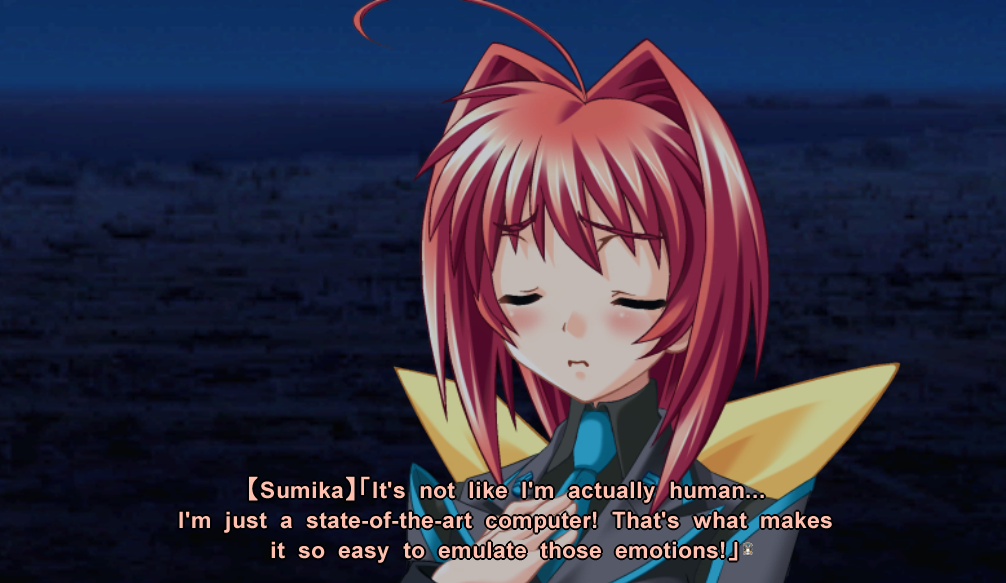 Small aside about Sumika Kagami's humanity: The existence of this soul is also found in the same scene in Muv Luv as the drama of the Sumika/Unit 00 distinction calls to mind the debate of positivism. Is it possible, perhaps to boil down the essence of man to logical parts, even going further than psychology, down to perhaps just a collection of electric impulses? Like a computer? Though Unit 00 is really physically a computer, Takeru and, I think, the author is arguing that she is still a human being despite that, that she has a soul still. This is similar to the situation we find ourselves in, we know through investigating our anatomy that we do have neurons in our brain and that they physically effect what we perceive to be our thought. But, I say, even so our consciousness and personhood reside in the soul. Much like how Takeru sees Yuuko-sensei fashion the switchboards of Kagami's "brain" and does not deny her God-given personhood, so should we not fall prey to the positivist reduction of the person to the set of wires God created to effect his will in the creature bearing his image. This is similar to what Dostoevsky argues in the famous first part of Notes from Underground which I will refrain from quoting here as I don't have my copy on-hand and I want everyone reading this to read that on their own as well, being the best of Dostoevsky in my opinion while also being really short. Another aspect is idea of Sumika's actions making her unhuman regardless of her physical makeup. One genius aspect of the BETA is their method of imprisoning humanity, through the exploitation of sexual pleasure to make the imprisonment voluntary and self-consuming. Sumika is the only survivor and even then, her lust has literally eaten her away to being merely a preserved brainstem. This is the reason why she claims her heart itself is no longer human, that she succumbed to this. This is exactly what sin generally does to us, lust being the most vicious. We become less than the creature that had life breathed into it by God when we sin. In a sense we become inhuman. Yet, God still loves us and wants to help us restore our humanity in him. This is represented in Muv Luv through the romantic love Takeru Shirogane feels to this Sumika, though clearly, he is not a perfect analogue for the savior, as no one but Christ himself can be, but his love for her despite her "inhumanity" certainly makes one recall this purer divine agape. This is even further expounded earlier in the story when Takeru's mission was to "make the 00 unit a human." 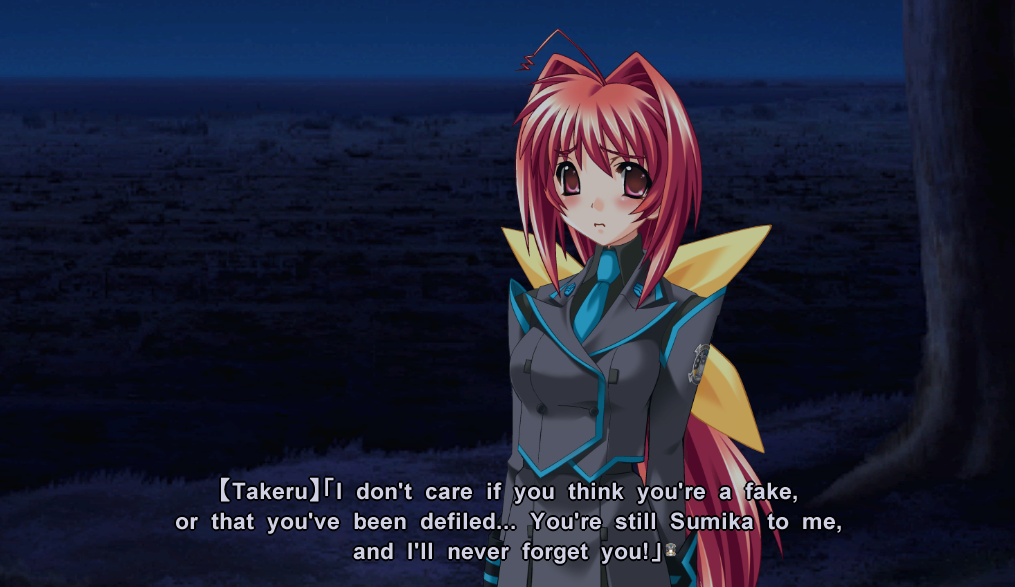 In any case as you may tell I've been cooking this up in my noggin for a while. I love Muv Luv and have wanted to vent my thought on it. Allow me my final thoughts in this article.

Muv Luv is a story of heroes. Imperfect humans with moral failings certainly but heroes by their deeds nonetheless. In particular it moved me to no end how much the snot nosed and even comically cruel teenager Takeru Shirogane became a hero, and a true hero that we nowadays even rarely see in fiction. That's why when I read Muv Luv: Alternative the after credits scene made me sad. Sad, as I thought I watched the hero Takeru Shirogane die and the Sumika Kagami who gave her life for love be forgotten, save for in Kasumi's heart. Now, having thought the topics of this paper over for months prior to writing, I can be at rest. Because now I believe that the Takeru Shirogane and Sumika Kagami we see horsing around in the epilogue remain the heroes they showed us to be. Because they are the same in every world. They are heroes in every world and will remain that way.